Electron microscopes have exponentially expanded our understanding of the world by making what was once invisible, visible. The first electron microscope was developed in 1931 and was capable of 400x magnification. It’s inventors, Ernst Ruska and Max Knoll, won the Nobel Prize for their work, which has forever changed the way scientists image materials. Their breakthrough was to use electrons instead of photons to capture images of materials. Since the wavelength of energized electrons is 50,000 times smaller than visible light photons, electron microscopes are able to resolve fine detail at magnifications beyond 10,000x. The Transmission Electron Microscope (TEM) instrument is optimized to achieve extremely high magnification and resolution, allowing researchers to view samples at the atomic level.

Similar to an optical microscope, a TEM uses an electromagnetic lens to focus electrons into a thin beam. This beam travels through the sample at nearly the speed of light and – depending on the thickness, composition, structure, and state of the sample – induces a plethora of electron, photon, and phonon scattering events. After passing through the sample, the unscattered electrons in the beam hit a fluorescent screen at the bottom of the microscope, producing a shadow image of the sample. A photograph is then taken of the shadow image and studied further from there.

From 1931 to now, the electron microscope has evolved greatly – capabilities have expanded, magnification levels have grown, and the experiments performed have become more complex. Today, new technology has been developed that allows the microscope to be turned into a nanoscale experiment chamber through the capabilities of in situ TEM.

For applications in biology, materials, semiconductor, and composition characterization research, TEMs have a wide range of capabilities, but also a number of limitations. First, we’ll take a look at a few constraints of TEM, as well as how in situ TEM addresses these challenges:

The Current Limitations of TEM 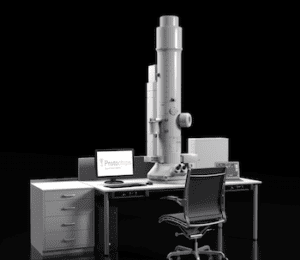 The modern transmission electron microscope can be used for high-resolution imaging, 3D mapping of nanoscale samples through tomography, elemental analysis with Energy Dispersive X-ray Spectroscopy (EDXS), and analysis of the thermal and electronic state of a sample through Electron Energy Loss Spectroscopy (EELS). While TEM is advanced and capable of many types of experiments, it does possess some limitations.

TEMs are expensive, precise, and sensitive equipment, making them difficult to operate and limiting their use to academic research and industrial R&D. Additionally, the samples looked at under TEMs must be carefully polished to extremely thin dimensions – 1,000 times thinner than the width of a human hair – for proper viewing. Typically, researchers create such thin samples by using successively finer polishing media, which can take hours or even days to successfully complete.

One of the most significant limitations of TEM is that samples are completely static and are restricted to the ultra-high vacuum conditions present inside the TEM. However, this is not how materials exist in the natural world – dynamic and energized reactions underpin the lives of all materials, regardless of their use or properties. Since these natural interactions cannot be mimicked with a traditional TEM, the insights researchers can glean about real nanoscale processes are limited.

The Advantages of In Situ TEM

In situ transmission electron microscopy is a technique that allows researchers to study samples in real-time, under real-world conditions. Researchers are able to extract much more data from their samples than they can with traditional microscopy, as in situ tools are able to negate the vacuum-condition limitation of TEMs.

Sample preparation for in situ TEM remains a challenge for this technique, as the same difficulties in sample preparation can be compounded by the need to place samples within the operating area of the in situ holder. However, while multiple samples are often needed for imaging in traditional TEM, a single sample can be used to conduct dozens of different in situ experiments – improving lab productivity by generating more results. Additionally, in situ TEM can be used for energy-dispersive X-ray spectroscopy (EDS) analysis. This relies on X-ray excitation and allows for detailed chemical characterization of samples.

Recently, in situ TEM became far more accessible through the use of Micro-Electrical-Mechanical-Systems (MEMS) devices to control sample conditions on a silicon chip just a few millimeters in size. These chips are placed within the TEM holder and are specialized to produce various natural-world conditions inside of the TEM, depending on what the researcher is aiming to study. For example, in situ TEM holders can produce heat conditions, apply atmospheric pressure, and allow for liquid microscopy study.

The Applications and Uses of In Situ TEM 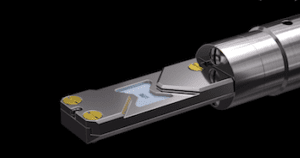 Where TEM has limitations, in situ TEM expands upon them; a TEM is an observational tool that is primarily designed to capture a “snapshot” of a static sample, but in situ techniques add experimental capabilities to the TEM, making it a powerful technique for many scientists. With MEMS devices and in situ TEM holders, researchers can control the environments they observe their samples under, finally making it possible to perform real experiments within the TEM. In the near future, in situ TEM will continue to enable new types of research and will produce further scientific discoveries.

In situ TEM has already been used to complete research monumental in various fields. Learn more about in situ TEM research and use cases.