The Atmosphere Catalysis Solution Announced as one of 2019’s Most Innovative Research Solutions!

We are honored that Microscopy Today has chosen our Atmosphere Catalysis Solution as one of 2019’s most innovative new products to advance research through electron microscopy! Thank you to Microscopy Today for taking the time to evaluate our system and recognize the innovation, and thank you to all of our collaborators, customers, and friends in the field for taking the time to help us understand what the field really needs in order to truly advance. Why did the Atmosphere Catalysis Solution win, you ask? Check out the details below!

What is the Atmosphere Catalysis Solution?
The Atmosphere Catalysis Solution is the first commercial in situ environmental TEM system with an integrated mass spectrometer and flexible gas handling system specifically designed for catalyst materials research. This novel system enables researchers to study how a catalyst’s typical operating environment affects its efficiency, specificity, and life span starting at the atomic level. 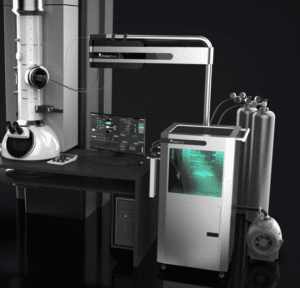 What is the significance of this development for science and technology?
Highly efficient catalysts are the key to a cleaner environment and greener industrial processes. Understanding catalyst behavior at the atomic scale is critical in understanding its behavior during operation, and ultimately what causes it to deteriorate over time. Once that fundamental understanding is achieved, the possibility of atomically fine-tuning a catalyst for specificity and efficiency becomes closer to a reality. With the Atmosphere Catalysis Solution, researchers can precisely vary all relevant environmental conditions and observe how they affect not only the atomic structure, but also the reactivity of the catalyst, identifying weak spots that lead to deactivation.

Demonstrating the Atmosphere capabilities in Shanghai.

How does the Atmosphere Catalysis Solution work?
The system includes a closed-cell TEM holder, custom gas handling manifold, vapor introduction kit, and an integrated residual gas analyzer mass spectrometer (RGA). Researchers create a realistic operating environment for their catalyst sample in the closed-cell holder between two micro-electrical mechanical systems (MEMS) devices that “sandwich” together to form a mini reactor, which can then be safely inserted into the TEM. The environmental controls include gas composition, pressure, flow rate, and temperature. Environments are created with up to 1 atmosphere of pressure and up to 1000°C using a patented silicon carbide heating membrane. Experimental parameters are set using the intuitive workflow of the Protochips Clarity software that allows control of each environmental parameter independent of one another.

Sealing your catalyst sample in the closed-cell TEM holder is the first step to creating the “mini reactor”.

How is the Atmosphere Catalysis Solution an advancement over current and previous technologies?
Other technologies lack 1) the ability to source gases relevant to catalysis development and 2) the ability to measure catalytic reactivity at the nanoscale without affecting simultaneous imaging.

Gas handling systems are typically designed using mass-flow controllers (MFCs) that are calibrated to accurately meter a handful of gases, resulting in a relatively small list of gases that are compatible. The Atmosphere Catalysis Solution’s one-of-a-kind gas handling system takes advantage of Dalton’s law of partial pressures for measuring, mixing, and flowing gases accurately. Without the restrictive calibrations of an MFC, the gas can be anonymous to the system and the range of compatible gases widens exponentially to include complex mixtures, custom exhausts captured in-house, and vapors such as water, alcohols, and organics.

The RGA has been integrated for rapid gas detection and to maintain imaging resolution in the TEM. Mounting the RGA on the boom of the system places the gas detector as close to the reaction as possible, decreasing detection time to less than 3 seconds as compared to any “external” RGA systems which can be closer to 15 seconds. Ultra-fast detection times are critical for accurate correlation between TEM data and RGA data. Integration also allows the RGA’s high-vacuum environment to be supported by the high-vacuum environment already in Atmosphere’s gas handling system, eliminating the need for the noisy diaphragm pump that compromises imaging resolution, yet is required with any other mass spectrometry system. This is the first RGA of its kind, specifically designed to be used alongside these incredibly powerful, but sensitive, microscopes.

Want to learn more about how the Atmosphere Catalysis Solution can help advance your specific research? Please send an email to sales@protochips.com requesting more information and we will be happy to help!

**Microscopy Today is the official magazine of the Microscopy Society of America (MSA).

Structure of the 2019-nCoV “trimeric spike” 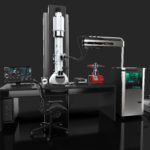 The Atmosphere Catalysis Solution Announced as one of 2019’s Most Innovative Research Solutions! 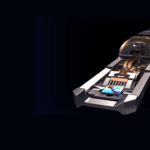 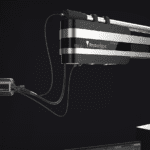 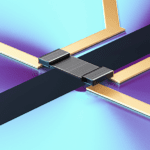