Immobilized gold nanoparticles were imaged in a liquid containing water and 50% glycerol with scanning transmission electron microscopy (STEM). The specimen was enclosed in a liquid compartment formed by two silicon microchips with electron transparent windows. A series of images was recorded at video frequency with a spatial resolution of 1.5 nm. The nanoparticles detached from their support after imaging them for several seconds at a magnification of 250,000. Their movement was found to be much different than the movement of nanoparticles moving freely in liquid as described by Brownian Motion. The direction of motion was not random—the nanoparticles moved either in a preferred direction, or radially outwards from the center of the image. The displacement of the gold nanoparticles over time was three orders of magnitude smaller than expected on the basis of Brownian Motion. This finding implies that nanoscale objects of flexible structure or freely floating, including nanoparticles and biological objects, can be imaged with nanoscale resolution, as long as they are in close proximity to a solid support structure.

In situ LC-STEM analysis of the movement of gold nanoparticles in liquid. Much slower movement was observed than what was expected on the basis of Brownian motion.
Keywords: Nanoparticles; Dynamics 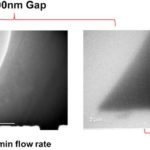 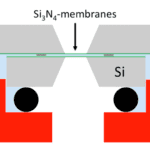 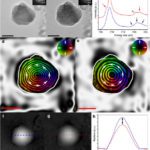