Grain growth and microstructural evolution of thermally stabilized Fe91Ni8Zr1 were investigated by in situ and ex situ studies. Our investigations suggest that the microstructural evolution is fairly slow and the microstructure shows stabilization up to about 700 °C. Above this temperature, a certain fraction of grains grow abnormally into the nanocrystalline matrix, resulting in a bimodal microstructure and causing the complete loss of thermal stability. The reason for abnormal grain growth and the loss of thermal stability is identified as the appearance of the fcc γ-phase and consequent reduction in the total area of grain boundaries and the overall stored energy.

Using in situ heating in a Hitachi HF-2000 TEM and ex situ analysis with XRD, the authors analyzed the thermal stability of an iron alloy, Fe91Ni8Zr1. The as synthesized material had a polycrystalline grain structure with grain sizes on the order of 50 nm and smaller. The material is thermally stable until around 500° C where grain growth begins to appear, with grains growing to larger than 100 nm, and occurring and ceasing quickly after the change in temperature. They found that the material was initially of the body-centered cubic (bcc) phase at room temperature and up roughly 700° C, where there was a phase change to face-centered cubic (fcc) associated with larger grain growth, and loss of thermal stability. This alloy is a model material for study of grain growth kinetics. 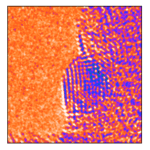