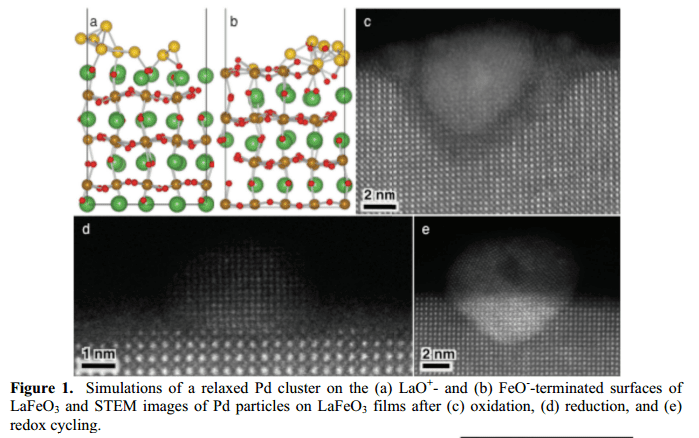 Image courtesy of Microsc. and Microanal.

First promoted by Daihatsu Motor Co. as an ‘intelligent catalyst’ [1], the ‘self-regenerative catalyst’ is an automotive catalyst in which the precious metal (e.g. Pt, Pd, Rh) supposedly dissolves into a carefully chosen perovskite oxide support upon oxidation, and re-disperses as metallic particles upon reduction; cyclical redox conditions that are already present in gasoline engine exhaust due to the fuel injection control system. This is counter to the behavior of metal particles on most supports, that irreversibly coarsen during redox cycling. Though the mechanistics of such a system are of great interest to the catalyst community, the authors of the original report (and subsequent studies) utilized only bulk characterization techniques (e.g. EXAFS, XANES) to analyze the average structure, and thus they did not satisfactorily probe the local environment of the metal particles and/or ions.

The gas cell is used to study the behavior of metal/perovskite materials for 3-way automotive catalysts. The in situ studies revealed a more complex interplay between the metal and support than had been previously realized.

In situ Analytical TEM of Ilmenite Reduction in Hydrogen 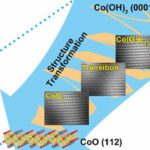 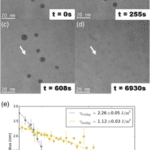 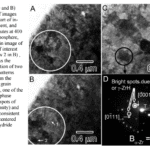