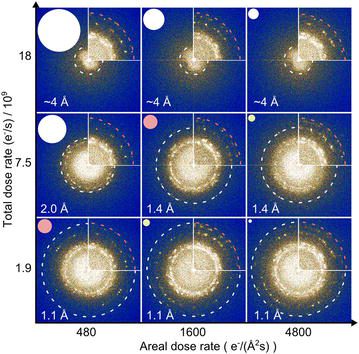 The introduction of gaseous atmospheres in transmission electron microscopy offers the possibility of studying materials in situ under chemically relevant environments. The presence of a gas environment can degrade the resolution. Surprisingly, this phenomenon has been shown to depend on the electron-dose-rate. In this article, we demonstrate that both the total and areal electron-dose-rates work as descriptors for the dose-rate-dependent resolution and are related through the illumination area. Furthermore, the resolution degradation was observed to occur gradually over time after initializing the illumination of the sample and gas by the electron beam. The resolution was also observed to be sensitive to the electrical conductivity of the sample. These observations can be explained by a charge buildup over the electron-illuminated sample area, caused by the beam–gas–sample interaction, and by a subsequent sample motion induced by electrical capacitance in the sample.

They investigate resolution degradation as a function of time, which was resulted from interaction between sample-gas-beam, as well as the charge-buildup over the viewing are of the sample. They also showed that for in situ experiment using ETEM, low beam dosage should be used in order to maintain resolution.

Initiation and Reaction in Al/Bi/2O3 Nanothermites: Evidence for the Predominance of Condensed Phase Chemistry 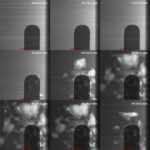