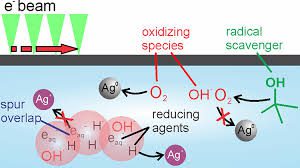 Image courtesy of Chemistry of Materials

Systematic study of electron beam induced growth of silver nanocrystals. The dose rate was controlled by beam current and magnification and tert butanol was added to the solution to scavenge hydroxyl radicals and oxygen gas, thus leading to an increased chemically reducing environment. The nucleation and growth rates of the nanocrystals did not increase with electron dose rate, rather the opposite occurred which is the opposite of what is traditionally expected in liquid phase EM. These results indicates that the nucleation and growth reactions are controlled by complex radiation chemistry and kinetic parameters.

In-Situ Transmission Electron Microscopy of Liposomes in an Aqueous Environment 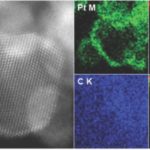