Image courtesy of Appl. Catal. A.

The reduction of a metal oxide is often a critical preparation step for activating catalytic behaviour. This study addresses the reduction process of NiO in pure form and in a composite of NiO/yttria-stabilized zirconia (YSZ) in hydrogen relevant for solid oxide electrochemical cells by comparing results from environmental transmission electron microscopy (ETEM) with thermogravimetric analysis (TGA). The temperature dependent reduction profiles obtained from TGA confirm an inhibitive effect from YSZ on the NiO reduction. The ETEM images show the growth of Ni in decaying NiO and reveal the nanoscale morphological changes such as pore formation in NiO above 280 °C and densification and collapse of the pore structures above 400 °C. The accelerated Ni front in NiO illustrates the autocatalysis of the reaction. A rapid temperature ramping from room temperature to 780 °C in hydrogen in 1 second resulted in immediate morphological changes at the nanoscale from dense NiO to dense Ni. The analysis suggests that the inhibitive effect of YSZ on the NiO reduction reaction is not due to a direct local interaction between YSZ and NiO, but instead due to gas and/or mass transport limitations.

The examination of NiO’s reduction both in pure form and in a NiO/yttria-stablized zirconia composite in hydrogen relevant for solid oxide electrochemical cells. This was achieved by comparing results from environmental transmission electron microscopy with those from thermogravimetric analysis. 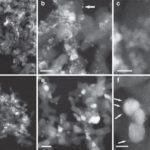