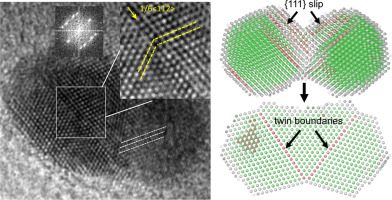 Dislocation mediated alignment processes during gold nanoparticle coalescence were studied at low and high temperatures using molecular dynamics simulations and transmission electron microscopy. Particles underwent rigid body rotations immediately following attachment in both low temperature (500 K) simulated coalescence events and low temperature (∼315 K) transmission electron microscopy beam heating experiments. In many low temperature simulations, some degree of misorientation between particles remained after rigid body rotations, which was accommodated by grain boundary dislocation nodes. These dislocations were either sessile and remained at the interface for the duration of the simulation or dissociated and cross-slipped through the adjacent particles, leading to improved co-alignment. Minimal rigid body rotations were observed during or immediately following attachment in high temperature (1100 K) simulations, which is attributed to enhanced diffusion at the particles’ interface. However, rotation was eventually induced by {111} slip on planes parallel to the neck groove. These deformation modes led to the formation of single and multi-fold twins whose structures depended on the initial orientation of the particles. The driving force for {111} slip is attributed to high surface stresses near the intersection of low energy {111} facets in the neck region. The details of this twinning process were examined in detail using simulated trajectories, and the results reveal possible mechanisms for the nucleation and propagation of Shockley partials on consecutive planes. Deformation twinning was also observed in-situ using transmission electron microscopy, which resulted in the co-alignment of a set of the particles’ {111} planes across their grain boundary and an increase in their dihedral angle. This constitutes the first detailed experimental observation of deformation twinning during nanoparticle coalescence, validating simulation results presented here and elsewhere.

In situ heating and MD simulations showed the role of dislocations, grain boundaries and twinning during coalescence of gold nanoparticles. HRTEM, HAADF imaging and fast Fourier transforms provided great insight into the structural analysis and phase change upon annealing. 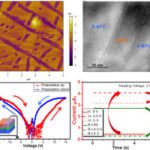 Atomic Step Flow on a Nanofacet 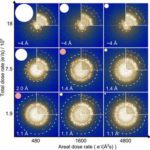