Can we control the crystallization of solid CaCO3 from supersaturated aqueous solutions and thus mimic a natural process predicted to occur in living organisms that produce biominerals? Here we show how we achieved this by confining the reaction between Ca2+ and CO32− ions to the environment of nanosized water cores of water-in-oil microemulsions, in which the reaction between the ions is controlled by the intermicellar exchange processes. Using a combination of in situ small-angle X-ray scattering, high-energy X-ray diffraction, and low-dose liquid-cell scanning transmission electron microscopy, we elucidate how the presence of micellar interfaces leads to the formation of a solute CaCO3 phase/species that can be stabilized for extended periods of time inside micellar water nano-droplets. The nucleation and growth of any solid CaCO3 polymorph, including the amorphous phase, from such nano-droplets is prevented despite the fact that the water cores in the used microemulsion are highly supersaturated with respect to all known calcium carbonate solid phases. On the other hand the presence of the solute CaCO3 phase inside of the water cores decreases the rigidity of the micellar surfactant/water interface, which promotes the aggregation of micelles and the formation of large (>2 μm in diameter) globules. The actual precipitation and crystallization of solid CaCO3 could be triggered “on-demand” through the targeted removal of the organic–inorganic interface and hence the destabilization of globules carrying the CaCO3 solute.

A novel experimental setup was used to study the effects of confinement of supersaturated precurser solutions on crystallization processes using LC-TEM. Reverse micelles in isooctane were used to deliver and mix supersaturated calcium chloride and sodium carbonate. Upon displacement of the isooctane with ethanol (delivered via flow) the micelles were destabilized thus reducing confinement and initiating formation of calcium carbonate. The resulting mechanism was studied using LC-TEM and SAXS. 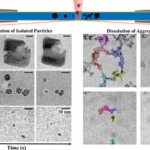 Real-time imaging and local elemental analysis of nanostructures in liquids 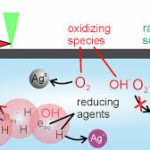