Carbon nanotubes have many material properties that make them attractive for applications. In the context of nanoelectronics, interest has focused on single-walled carbon nanotubes4 (SWNTs) because slight changes in tube diameter and wrapping angle, defined by the chirality indices (n, m), will shift their electrical conductivity from one characteristic of a metallic state to one characteristic of a semiconducting state, and will also change the bandgap. However, this structure–function relationship can be fully exploited only with structurally pure SWNTs. Solution-based separation methods yield tubes within a narrow structure range, but the ultimate goal of producing just one type of SWNT by controlling its structure during growth has proved to be a considerable challenge over the last two decades. Such efforts aim to optimize the composition or shape of the catalyst particles that are used in the chemical vapour deposition synthesis process to decompose the carbon feedstock and influence SWNT nucleation and growth. This approach resulted in the highest reported proportion, 55 per cent, of single-chirality SWNTs in an as-grown sample. Here we show that SWNTs of a single chirality, (12, 6), can be produced directly with an abundance higher than 92 per cent when using tungsten-based bimetallic alloy nanocrystals as catalysts. These, unlike other catalysts used so far, have such high melting points that they maintain their crystalline structure during the chemical vapour deposition process. This feature seems crucial because experiment and simulation both suggest that the highly selective growth of (12, 6) SWNTs is the result of a good structural match between the carbon atom arrangement around the nanotube circumference and the arrangement of the catalytically active atoms in one of the planes of the nanocrystal catalyst. We anticipate that using high-melting-point alloy nanocrystals with optimized structures as catalysts paves the way for total chirality control in SWNT growth and will thus promote the development of SWNT applications.

The observation of W₆Co₇ alloy nanoparticles maintaining crystalline form when heated in a vacuum to 1100° C.

In situ chemoresistive sensing in the environmental TEM: probing functional devices and their nanoscale morphology 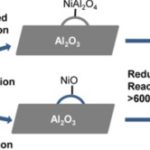 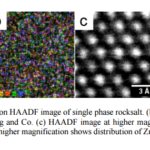