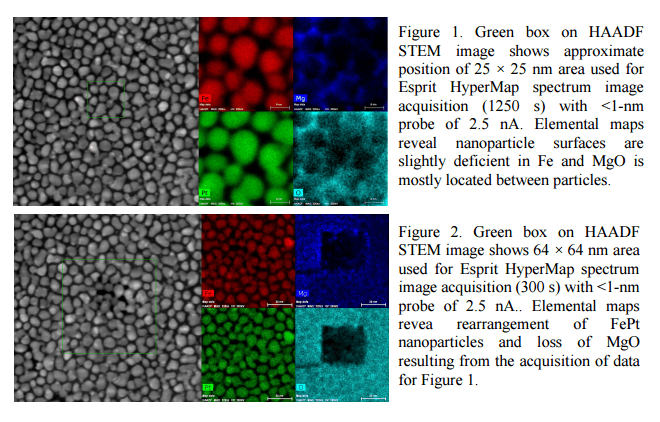 There remains much interest in the development of FePt for magnetic recording media. For almost a decade we have performed extensive studies of FePt multilayers and nanoparticles, especially epitactic growth on layers of MgO and the phase transformation from a disordered solid solution to the L10 ordered structure that exhibits attractive magnetic properties [1-7]. Many studies incorporated atomic-resolution high-angle annular dark-field (HAADF) scanning transmission electron microscope (STEM) imaging which readily discriminates the Pt and Fe because of the large difference in their atomic numbers. The studies at Oak Ridge National Laboratory also included in-situ annealing with a prototype Protochips Aduro heating holder in a probe-corrected JEOL 2200 operated at 200kV. Complex annealing behavior was frequently observed including unexpected L12 ordering which implied a local composition nearer to Pt3Fe than FePt. It was unclear whether some of these observed effects were artifacts caused by the electron beam or were due to incorrect composition of as-synthesized nanoparticles. Some evidence of the latter was obtained but composition measurements by energy-dispersive X-ray spectrometry (EDS) in a Philips (FEI) CM200FEG with probes of ~1 nA were compromised by beam damage, frequently with a dramatic loss of Fe. This effect was somewhat unexpected because 200 kV is well below the displacement threshold for Fe in FePt. At surfaces atomic bonding may be weaker but it is unknown if that is a major contribution to the responsible mechanism. Certainly, hole drilling at beam energies well below the (bulk) displacement threshold has been a commonly observed effect since soon after the introduction of FEG-STEMs and is frequently more pronounced in the presence of oxide on the specimen surface. Conventional wisdom is that surface carbon (contamination) is actually helpful in preventing hole drilling, perhaps as a sacrificial surface species that self-heals by surface diffusion as it is sputtered away. However, in the case of FePt nanoparticles deposited on a carbon support film it was postulated that, under the action of the electron beam, the carbon might react with the Fe exacerbating, if not directly causing, loss of Fe from FePt.

The demonstration of gold nanoparticles’ entrapment after being embedded in a hybrid organic-inorganic matrix.

Synthesis and Low-Temperature In Situ Sintering of Uranium Oxide Nanoparticles